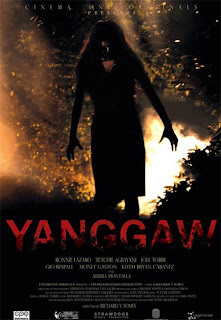 I am never a fan of horror movies… I get scared easily and my imagination go wild… But then I couldn’t pass up a very good indie film..especially when I heard that it’s done in Hiligaynon dialect and the actors got acting awards for their performance. So one afternoon, my coresidents & I huddled in our small office to watch the film.. We were all enthralled, transfixed and absorbed in the film… Our emotions were stirred with fear, frustrations, awe and disgust…. Ronnie Lazaro the lead actor of the film who played the father was very convincing and was really deserving for winning the Best Actor category at the latest Gawad Urian. Same goes to the newbie Aleera Montalla who played the daughter of Ronnie Lazaros character in the film and the unfortunate fate of turning an “áswang”, who also got an award in Gawad Urian for Best Supporting Actress category. Kudos to the director Richard Somes who made this beautiful art of a film… The beauty of the film doesn’t relay on the shocker effects of the usual horror movies but it was more about the importance of family and the unconditional love of a father to his daughter. Your heart would bleed for Junior (Ronnie Lazaro’s character) for his anguish & pain on their family’s ordeal as well as for Amor (Aleera Montalla’s character). It was a beautiful beautiful film….I encouraged my siblings & other friends to watch it. And after watching it, they loved it as well. But I admit I didn’t sleep in my room for a week after watching it… I sleep near the windows…. Don’t want ”ma-yanggaw”…….