It’s  my boyfriend and I’s 10th monthsary last week…. Wohooo! Though with our hectic schedules, we manage to squeeze some time for each other and decided to treat ourselves for a little taste of Thai in Iloilo City… I have always love Pepe Thai even before it was still along the highway in Jaro. It is in this cool two-storey nipa hut that is usually crowded every lunch time, which is the only times they are open (and they are closed on Sundays) and lots of cars would park along side the road.
Now, they are in this new establishment, Plazuela, near SM City. It still is closed during Sundays though.  But no more nipa hut, rather the restaurant space was painted in eggshell hue, giving out a simplistic atmosphere, leaving the costumers coming for the food — a Ilonggo twist to Thai cooking — than for the ambiance.

We ordered a dinner good enough for two and for our playful discourse, we decided to be food critics for that night.

Food Critic Honeybee: Hmmm…. I love the play of color of this dish. (I cut the fried egg to pieces and squeeze calamansi over it). I could taste the slight tang of the citrus that makes this fried rice interesting. Though I would want a more bigger cuts of beef mix into the rice for me to say, “Kanin pa lang, ulam na” hehe…

Food Critic JR: I rather not mix the egg with the rice and eat it separately. I like this type of fried rice. It is like thailand in a plate – colorful, interesting and lots of surprises.  One more plate of khao phat pleease!!

Food Critic Honey: I miss this curry. I used to make this kind of curry at home,unfortunately i ran out of curry paste. I love the tangy after-taste of the lemongrass in it. It is not as hot as I remembered  and the sauce is not as thick as it was before. Sad…(But I finished the rest of bowl, anyway, hehe)

Food Critic JR: It is not spicy as I would like it to be. I despised the after-taste of the lemongrass. I give this dish a 3 over 10. (to Food Critic Honeybee — “Baby sweetie, you finish it na lang”… which she happily agrees, hehe) 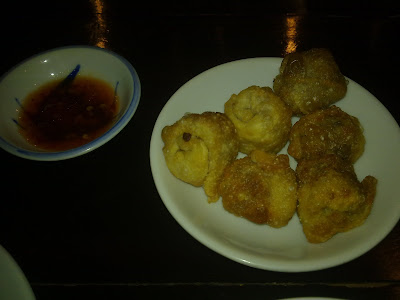 Food Critic Honey: Love love love! One serving for each of one, please! Love their sweet spicy sauce.

Food Critic JR: The best! It is a dwarf-version of one of our favorite foods- Lumpia Shanghai. We need more sauce I think… hehe 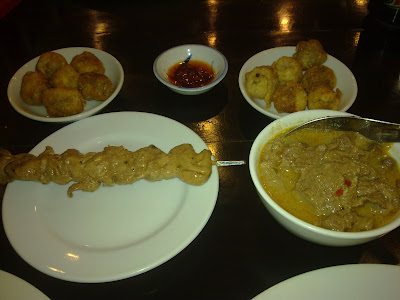 Though it was evident that night that we both have no future as professional food critics, it still wouldn’t stop us from seeking the next food adventure. With Buddha-like tummies and happy hearts, we were glad to taste a little bit of Thailand in Iloilo City that night…. ♥