I was never bless with the perfect skin. Boohoo! But at least, I never was known to be that pimply kid in my younger years. However, there are those occasional zit attacks- the humongous zit on my nose or chin or the trillion blackheads & whiteheads that invaded my oily face. And I would always note that these attacks happens during the stressful phases in my life – medical internship, board exams and break-ups. It also doesn’t help that I can be easily be seduced by attractive packing of a new skincare line or cosmetics. Now, that I am getting older, my skin reacts easily to harsh ingredients. So, no retinols for me.


But thank God because I found the perfect zit-buster team for my not-so perfect skin. Never again do I have those irritating acne phase as long as I use them. If I omit one in my regime, I am bound to get a zit here and there. 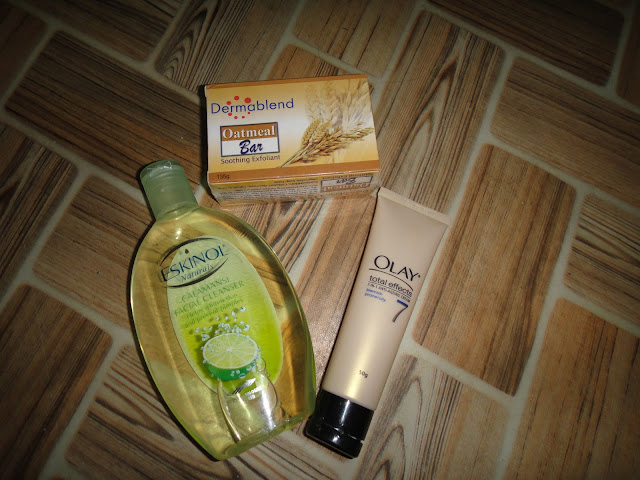 
After searching for the perfect cleanser, finally I found IT. Though the Clean & Clear Foaming Cleanser came close, this was even better. I got a free Dermablend Oatmeal Bar during one of our annual convention of the Philippine Association of Family Physicians in Manila, in one of the kiosk that giveaway free stuffs like medicine, cutesy ballpens, etc and yes, a bar of soap! I just kept the bar of soap in my dresser as reserve in case I ran out of soap in the bathroom, haha. However, I have to thank my good friend, Dr. Mel Piodena who told me to use it because she tried it and it was great. And she was right! My face felt so smooth and nice after using it. I love using it especially after my 24 hour duty shift where I would catch up on a bit zzz’s at the hospital dorm. But before sleeping, I would use the soap and I would wake up, not with a dry haggard face like before but with a smooth & supple skin.. Yey! Also I noticed after using it, some dark spots from picked pimples somehow lighten. I guess it has to be the exfoliating effect of the oatmeal. I so love this soap…


My mother has been using this brand for so long. But when I got a little older and I thought a bit wiser, I was too scared of the alcohol content of this toner/astringent, I decided to seek other options. I tried Lóreal, Celeteque, dermatologist’s astringent, the list goes on. They were either too mild or too strong. I guess I wasn’t that wiser, just older, hehe… So I got back to the original, Eskinol. Just because it is cheaper than most brands that doesn’t mean it isn’t going to work. Eskinol Cleanser efficiently removes some grim that cannot be entirely removed with a soap or other cleansers. It also whitens dark spots. Plus, it is budget-friendly. My wallet is rejoicing, hehe.


This product is such a lifesaver. If I forget to use this, my skin literally complains. I tried the Pond’s and I even tried the fancier line of Olay, the Regenerist Line. My face would be screaming. I went back to this moisturiser. This one is definitely, a keeper. My face feels really smooth and silky. This moisturiser isn’t sticky and gross like most brands. Since this is for blemish-prone skin, it has a salicylic acid that again has a exfoliating effect. So dark spots be gone! Also when I started using this, I rarely use any foundation (well, except on evening outing or cold season) because this is already a perfect primer for your makeup. Just this, a concealer and powder and you’re set. What is nice is it gives off a bit of shin when you sweat  a bit, so no need for a glow-enhancer product. Hurrah!


So that comprises my team for zit-busting…. How about you? What are your zit-busting products?


Here are some skin care tips I learned the hard way – from your regular family physician:


1. STICK TO WHAT WORKS. Stop product-hopping. Yes, that may work for hair by changing your shampoo now and then but have pity on your face. Our face are loyalist. As Miss Divine Lee said, hiyangan lang yan. If your face love that product don’t get carried away by some cute packaging.


2. DON’T POP THAT ZIT. Yes, I admit its fun, squeezing that unwanted zit but you suffer a great deal afterwards. Pock marks galore! When you squeeze out that pimple especially with dirty hands & fingernails, you are reintroducing more bacteria and infection in your already traumatized skin. You also push it even more deeper into the skin.


3. LESS IS MORE. More products used on the skin can irritate it. A simplified regimen can help your skin to avoid unwanted irritation and reactions from different products.


4. EXPENSIVE DOESN’T ALWAYS MEAN IT IS THE BEST. Expensive products isn’t the answer to your skincare woes. Even if you buy the most expensive skincare product but if your skin doesn’t like it, you will be crying because your skin is suffering so is your wallet. Though there are great cult-favorite products out there, just make sure it is right for you.


5. REMOVE TRACES OF MAKE-UP BEFORE SLEEPING. If you become lazy and hit the sack without washing your face, you would be bound to see a zit in the morning. Believe me, I know.


6. DRINK LOTS OF WATER. Water is your friend. By drinking lots of water, you eliminate toxins from your body and hydrates your skin, leaving you a glowing clear face.


7. EXERCISE. This too helps eliminate pimple attacks. Most people noticed less pimples when they have regular exercise. Just make sure to wash your face after gym time.


8. EAT MORE FRUITS OR VEGETABLES. Yes, our moms are right. More veggies & fruits keep a zit away. My mom used to tell me, eat more banana, look at the monkey, he doesn’t have a pimple. Haha!


9. CLEANSE-TONE-MOISTURIZE. Memorize these steps and you are good to go.


10. SMILE. We might not achieve the celebrity skin we all hope to have but if wear a smile, your face brightens and you glow….