I have been seen a lot of tweets about The Hunger Games the book for months. I wasn’t the slightest bit interested in investigating on the hype. When the movie came out which got a lot of people so excited, it got me. I wanted to know more about The Hunger Games. Since it was too late (or I was too lazy) to pick up a copy of the book, watching the movie is the next best option.
The Hunger Games was written by Suzanne Collins and I was surprised to know that it is a young adult novel since even the people who got hook on the book was well, past their adolescent stage. I guess the book appeals not just to young adults but to everyone. The story is situated in a fictitious country called Panem. The leaders of Panem organizes Hunger Games, an annual event in where they choose 1 boy and 1 girl aged 12 to 18 from each of the 12 districts to be selected through draw-lots to take part in a televised battle  where one can survive and the rest must be dead either by being killed by another contestant or by another circumstance due to lack of survival skills.The heroine is the strong-willed 16 year old Katniss Everdeen who volunteered herself in exchange of her younger sister. She was  played by Jennifer  Lawrence. She is known for playing the young Mystique/Raven in X-men: First Class. She also passed on the role to play Bella in the movie Twilight. Well, I guess everone has their own time to shine.
I went to watch the film with no inkling what the story was about (except for the few hints from the previous movie trailers I have seen.)
Here is what I think? 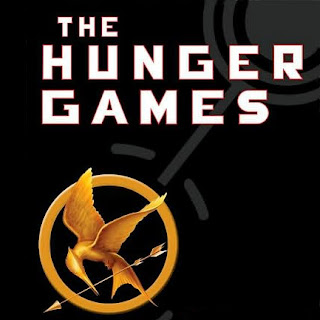 I believe Suzanne Collins is a ‘intense’ lover of reality shows. It exhibited a lot of inspirations from reality tv. Grotesque Reality TV… Imagine children killing each other, brutally, in order to be the lone survivor…. But wait a minute, isn’t that what most reality stars do to be winners in the show? Well, not kill each other literally but they do destroy each other in other forms & ways and sometimes themselves as they submit to the pressures of the game in order to reach the top. I believe if anyone who is interested in entering a reality show in the future should refer to The Hunger Games as their survival guide.
Here are the parallelisms of The Hunger Games & reality shows:
–  In order to insure your longevity in the game, you need to be strategic or you need to be remembered. Recall the other reality shows you have watched. A contestant becomes your instant favorite when he/she reveals a sob story, or tells off a judge with dignity & witty remark, or displayed awesome fashion instincts whenever he/she presents himself/herself to the panel.Watching American Idol, we all find Carrie Underwood adorable when the host, Ryan Seacrest asked her if she has seen an stars in Hollywood and replied that the sky has been quite downcast, she hardly saw some stars. She got us! We remembered her cute remark and became an instant favorite that led her to be the winner of American Idol Season 4. In The Hunger Games, the mentors of Katniss and her partner, Peeta emphasized them that they should be well-liked so they can get sponsors. Wow, sounds familiar contestants of reality shows? Hence, the grand entrance of the protagonist & her partner in flaming suits, Katniss’ guts stunt to do aim in an apple in the feast of organizers of the show, and engineering love interest. These are ploys to win.
– Like in the reality show created by Tyra Banks, America’s Next Top Model, they housed contestants in chic, posh and exquisitely interior-designed flats. In the movie, when Katniss and Peeta entered their new place, I couldn’t help but reminded by the scene when the aspiring models in ANTM enter their new pad. It was so similar except for the shouting, hysterical, crying and running around of the girls from ANTM, Katniss and Peeta hid their enthusiasm pretty well (or maybe they are thinking of their impeding death so hardly anyone can be enthusiastic about that).
– The Hunger Games have a cheeky, overly-smiling host played by the brilliant actor, Stanley Tucci. He reminds me of Ryan Seacrest from American Idol. If Ryan Seacrest lived in Panem, in the Capitol, the metropolis of the nation, he would look like him: extremely tanned skin with blue hair with a giant puff.
– If the show gets boring or if the producers of the show wants some kind of drama or has others plans contrary to the contestants’, they would create a diversion or twist so things would go their way. In The Hunger Games, they created forest fire & jungle animals with one wave of their hand and they would change rule as fast as a few seconds.
-If you are in a reality tv, you are away from other people for days, weeks , months and all you see is the same people who joined the contest. It is not uncommon that romantic connections are formed during the contest. We see it in Big Brother, Survivors, etc. Some are strategically ploy to stay longer in the game while some are out of loneliness and others could be the real deal like Amber and Rob in the Survivors.
-Tyra Banks tweeted a day ago that what she loved in the movie was the makeover which reminds her of the makeover in her show, america Next Top Model. The Hunger Games is a televised game so it is also a game of looking good. You die but you must look good dying. Hmmm….
Some other points of the movie:
Since I am completely without a clue with what happened in the book, (which most movie adaptation would fail to convey the book’s intent), I was taken aback initially at the concept of the story. I applaud at the powerful statement the author released in this book and at the same, cringe at the weirdness of concept. Kids killing each other?! Powerful it may be,did the whole storytelling delivering an equal powerful follow through? Sadly no. We all got (surprisingly) excited when the game started. We expected action, sufferings and extreme dangers. But they wasn’t enough of that. There was not enough conflict for us to get our spirits excited. They seem to me like young adults in a bad camping trip. I think James Franco’s character in 127 Hrs has better battle scenes with the rock where is his hand was stuck than them. The game dragged on and when it ended, it was so anti-climatic.
I did find Jennifer Lawrence as a refreshing Katniss. She was the right actor for the role. She glows from the screen. She is the typical “down-to-earth” pretty girl in the movie. After the movie, people would be asking, ‘Who is Jennifer Lawrence?’ and start googling her on the net. 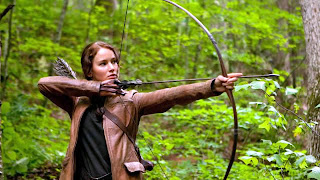 I don’t know in the book, if Suzanne Collins created an atmosphere for her readers to get giddy on the Katniss-Peeta loveteam but in the movie, I didn’t feel any chemistry from both of them. I would rather have Katniss end up with her bestfriend, gale Hawthorne played by Liam Hemsworth. Now, there I find some chemistry from that two. I think most of the characters in the film were purely developed and it was hard to decipher the real emotions of Katniss and Peeta in the movie and I would blame that partially for me not reading the book beforehand. Where they really in love with each other? Or its part of their strategy? One scene they were in each others throat. Next scene, they would have a heart-felt talk. Then next, one of them would find alliance with the other contestants and point the wherabouts of the other to survive. In another scene, they would kiss and cuddle each other. Now, I am confused.
It was interesting to see the costumes and makeup and headdresses of they people living in the Capitol. It was so colorful and entertaining. Tessa Prieto-Valdez would fit right in  the Capitol and she would be one of the fashion trendsetters there. It was also nice to see Lenny Kravitz and his glittery eyelids in the movie. I wish he sang there. Haha! I think Woody Harrelson and Elizabeth Banks were note=worthy and contributed well on the movie. I also find the little girl who played Rue very cute and adorable.
I was disappointed at how the director showed some action sequence that are mostly closed up. I didn’t understand what was going on and it made my head ache.
I give the movie 2.5/5. Interesting plots. Good Actors in Lead Roles. Lacks Action & Climax.
I will try to pick up the book so I can compare the two. And maybe just maybe my ratings would change. Just my opinion, no hard-feelings.
Like this post? Subscribe this blog by clicking here.
Become a Facebook Fan for more updates from LITTLE MISS HONEY