I love old Hollywood movies, the black and white ones. I used to stay up waiting for the Cartoon Network to change its programming to TNT Movies by 12 midnight.(However, now, they don’t show show TNT Movies and shows the Cartoon Network 24/7). So it is not surprising that my favorite actress is from that genre: Audrey Hepburn.

I don’t particularly like Marilyn Monroe. I haven’t seen any of her movies. I guess I gravitate more to brunette classy Hollywood actresses than to blonde bombshells. Marilyn Monroe is a sex symbol and has a flirtatious reputation that doesn’t appeal to me.

But this week, I saw the movie, A Week With Marilyn, and that impression of mine toward Marilyn Monroe suddenly changed…. 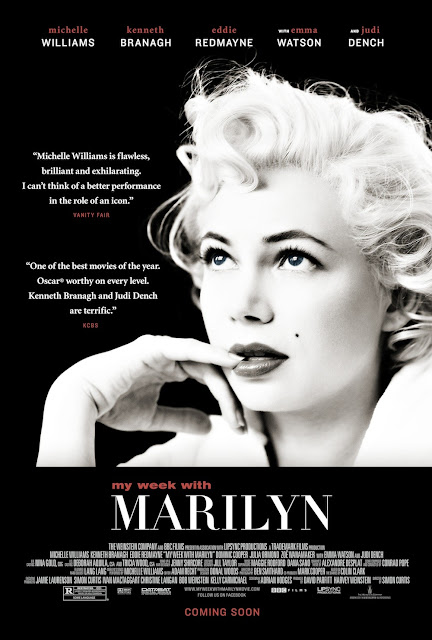 A Week With Marilyn is a biographical film based on based on two books by Colin Clark when he recounts his days as an assistant director at the  1957 film,The Prince and the Showgirl, how he got smitten by the ‘most famous woman in the planet’, Marilyn Monroe as well as their ‘ week’ together and the ‘special relationship’ they shared.

In this film, I gotten to know a bit of Marilyn Monroe. She was indeed captivating. When she turns on her charm (or her power), she can make any man swoon and obey whatever her whisper-y voice would command. She has a ‘little-girl-lost’ act that makes her so adorable and all men would scramble to take care of her (only to know that they will be into something more than they bargained for). But along with this gift of irresistible charm and sex appeal,  Marilyn has demons– dwelling inside of her. She was deeply insecure that she needs to be reassured of her worth, I presumed, every minute of everyday, which can be exhausting for a man, her partner or her husband to do. She must have some unresolved issues during her childhood that she wasn’t told enough by her parents how beautiful or how amazing she is. In order to validate herself, she uses her sexuality and sweetness to charm any person to give her the love she has always wanted. Not knowing that it is a futile task, because not unless she can truly love herself, she will be hungry for love and validation, well, until she dies. It is so sad. That is why this sort-of pity for her made me endeared to her. Yes, she has got me too. I have seen Marilyn Monroe (through Michelle Williams) and yes, I will not question now why men get hook on her because even me, I am starting to have a girl-crush on Marilyn too. hehe
Michelle Williams was amazing in the film as Marilyn. She truly deserves the 2012 Golden Globe in Best Actress Award for Comedy or Musical. (Coincidentally, Marilyn Monroe also won the same award in 1960 in her movie, Some Like It Hot). I like the part when she said to Colin, “Can I be her?” then she struck a pose, wiggled her hip and threw  a kiss. Marilyn Monroe came alive. Some of you would still be skeptical and say that maybe I just found Marilyn adorable because Michelle Williams was adorable as Marilyn. But I saw the real Marilyn Monroe and not Michelle Williams. The essence  of Marilyn Monroe. There were talks that Scarlett Johanssen was approached for the role but she turned it down. Also Elaine Hendrix was also considered for the role. But the director, Simon Curtis, denies all these and said that Michelle Williams was the only actress they sought to play the part. 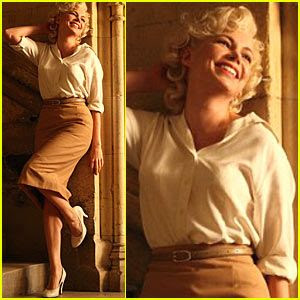 Ed Redmayne played the part of Colin Clark and he is exceptionally well. He is an English theater actor and model. I couldn’t help but stare at his gorgeous kissable lips, hehe. He was lovely man. He made Colin’s character believable that Marilyn would fancy him even if he is just a young assistant director. (Trivia: He has been link to Taylor Swift and Carey Mulligan). 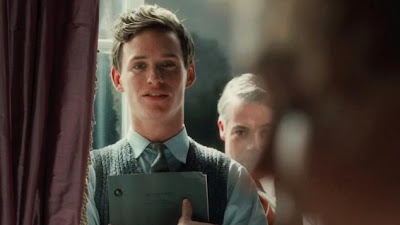 For the rest of the casts: Judi Dench, as usual, was her splendid and magnificent self. Kenneth Branagh is notable but he wasn’t Laurence Olivier for me. He was still Kenneth Branagh. Julia Ormond as Vivien Leigh was so-so. Catherine Zeta-Jones was first approached for the part but she need to attend to her husband, Michael Douglas who was sick. Also Rachel Weiz was approached but she was busy with many projects.

Some people who read Colin Clark’s book, A Week With Marilyn are skeptical of the memoirs. Some presumed that the accounts are embellished to cater to his  boyish fantasy or for some bit fame and probably fortune (which he did get both after writing the memoirs.) It was after-all a recount of a young man experiencing “first love’ and his feelings would have made the account with the  silver screen goddess, a tad bit romantic and self-serving for some people but then again, he was ‘in-love’ ( or in-lust?) so give him a break. As Judi Dench said in the movie to Colin Clark:’ First love is such a sweet despair….” How true… We have a great tendency for illusion and romanticism for what it actually is with our first loves…

In the end, I think the movie was wonderful. It was bittersweet and tugged my heartstrings. I have gained respect and affection for Marilyn Monroe. It may not be for those who want some action, some exciting plot & challenges or God-forbid, raunchy sex scenes because you will not find those in this film. It has a lot of talking parts… What it is trying to convey is this: a sad story of a  beautiful lonely girl who just wants to be loved. This is the vulnerability of Marilyn Monroe that has slowly destroyed her but it is also the same vulnerability that made us all fall in love with her…..