Courage is a beautiful character but sadly many people lack, including myself. I know people who have been struggling with imagined fear and reluctance to new challenges in life. Mostly what holds people back are not the circumstances they are facing but fear in their mind that they are most often just pure imagination. But in today’s mass sermon, I realise that there is nothing in life that we should fear because we are with God. It is true, we can do anything as long as we hold on to our source of strength who is God. The priest added that we should always offer our day to the Lord because a day not offered to God is like a body without soul. Actions should always be accompanied with intentions. So we should always move forward with courage to whatever endeavours, fights and goals of the day because God is always with us.
Today is an important day for Roman Catholics and Filipinos everywhere. The Vatican has canonised the 2nd Filipino Saint and Martyr, St. Pedro  Calungsod. I read about him in Wikipedia. There were not much information about his origin. They just know that he might be from the Visayas. Some suggested he might be from Cebu, Leyte, Loboc, Bohol or Molo, Iloilo. He is a sacristan and a catechist. He journeyed with Jesuit priests and catechists to Guam to teach and spread Christianity. He spread God’s Word to the pagans of Guam with enthusiam and fervour. However rumors where spread by a Chinese criminal named Choco exiled in Guam that the missionaries put poison in their baptismal water and making their babies sick.  Slowly people believed him. One of them is the high leader Mata’pang. When Mata’pang learned that Pedro Calungsod baptised his child. He was furious. He hit Calungsod in the chest by a spear and Mata’pang”s friend Hirao finished Calungsod off with a machete. 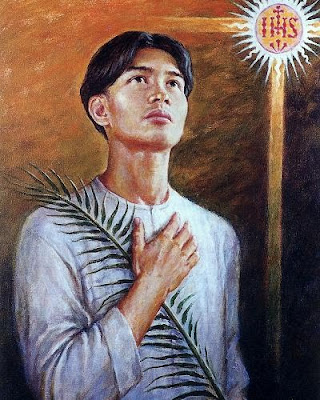 His bravery was born out of love for God. He have exhibited an intense determination, focus and passion to their mission. And it resulted to  many conversions of native of Guam to Christianity. St. Pedro Calungsod did not die in vain. He allows God’s strength to shine in him and it reflected to God’s people.
In today’s sermon, the parish priest also told us about the touching story of this Korean priest, Father John Tae-Suk Lee. He is the Korean’s Albert Schweitzer. He went to the poorest of poor of Sudan to serve them. He was also a medical doctor and he would do consultation for anyone who seeks his help. Many would travel days to see him. They know he can help them. Initially he would see 30-40 patients per day and reaching 300 patients. He built a hospital to cater to his patients. He also love music and he started this Don Bosco Brass Band for underprivileged youth. It is now a very popular Brass Band in Sudan. He died last 2010 but his good works has been immortalised in this video “Don’t Cry For Me, Sudan”.
This is just part 1. Please watch the rest in Youtube. You will not regret it. Even the parish priest admitted he was moved to tears when he watched it. You can see in the video the happy temperament of Father Lee. He always has a ready smile and you can see the real joy in his eyes. He was known by the locals as “Father Jolly” because of this.
Two exemplary man of God who teaches us that God’s strength dwells in all of us and we can do anything by His grace. Courage is not a exemplified by a lion’s roar or a loud resounding voice. Real Courage is the steadfast forging on to your life’s goal and mission with a quiet confidence and unwavering resiliency.
Happy Sunday everyone!