Last Father’s Day, my whole family celebrated the day in Macau!!! As we step down the ferry from Hong Kong to Macau, I was transported to wonderland of a more mature & sophisticated Alice… It was a dreamland. Who would disagree? You know when you are in the city of dreams when you see tall, big buildings with fancy decors made of gold, shining crystals and ceilings that look like you are staring at the skies. You walk in these fancy castles and they offer you free water, free ride to wherever you  want to go and when you walk their busy downtown streets, they hand you free food!!! So don’t blame me for falling in love to soon…


Here are useful tips in going about in the City of Dreams:


GOING ABOUT THE CITY


Macau is 40mile away from HongKong via a high speed ferry. You get to buy your ticket with free water bottles from the shouting vendors at the terminal.

There would be some Filipinos waiting when you get down the ferry offering to give you a tour of the place. Ok, shoot me for being so damn suspicious. They offered to give a tour of the city. We (meaning me, hehe) politely declined. I feared we are in for a modus operandi. But thank goodness, my mother has a kind heart unlike her stone-cold daughter, she agreed to have the two ladies  show us around the city. And we all learned they were angels in disguise. We would never enjoyed Macau like we did if they were not there to guide us. So don’t be to fast to disregard  a tour guide for your trip especially if its your first time in Macau.

Though they have cute rikshaw as a transportation around the city, what is fun and fantastic about the city is you get free rides from the buses of different casino hotels.


Casino hotels is the main reason for the booming economy of Macau. We are transported to an Asian Las Vegas for a cheaper airline ticket. Most of the casino hotels are exact replica of the original ones in sin city. It is fun entering every hotels and they give out free water bottles with different designs depending on the hotel and you get to be a member of the casino if you register. They would give you your atm-like card with your picture in it. You don’t need to use it, you can have it as a souvenir for your trip.


Venetian  is the largest casino/hotel in Macau. I been to the Venetian in Las Vegas. The Venetian in Macau is newer and less rustic than the one in Las Vegas. It is in brilliant yellow gold. The gondolas are inside the hotel unlike in Las Vegas where you see it outside the casino before you enter. It is not for free though, hehe. There, we got to meet another hardworking Filipino. He poses as a soldier statue. You give him a dollar or two, he moves. I really thought he was a statue at first.

Grand Emperor Hotel is a hotel owned by no other than Jackie Chan. On the floor are gold enclosed in transparent casing. WE WERE STEPPING ON GOLD!!! haha. Outside the hotel, you find the carriage used in the movie of Jackie Chan costarring Owen Wilson, SHANGHAI NOON.

City of Dreams Hotel was indeed a city of dreams in a capsule. You see beautiful mermaids floating around. And our tour guides, our angels manage to get us ticket in a magnificent 4D bubble show. We were brought into a world of colorful dragons that spit fire, freeze ice and slid our backs & heads.


I love the taste of Macau compared to the food in HongKong. I have always love Chinese food but the authentic Chinese flavor is not really for me. I guess my tongue goes for the Filipino-Chinese taste like ChowKing and the other Chinese restos I love in the Philippines. But it is nice to know that because of the  several influences of Macau from other countries, the food appealed to me.


One of the fun part of the trip was when we were in downtown Macau. It was a busy street, crazy and THEY HAND OUT FREE FOOD TO TASTE! Haha. Vendors shove yummy tasting ham-like meat, much like a tocino in the Philippines but in a more flatten and finer texture. They were also other delicacies & breads. My sis also discovered a dumpling being sold at the corner of the street. I am such a sucker for street foods! We also bought some ice cream shaving with jelly pearls at the bottom. 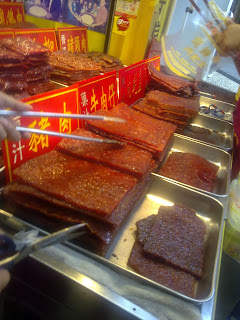 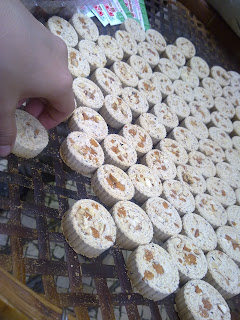 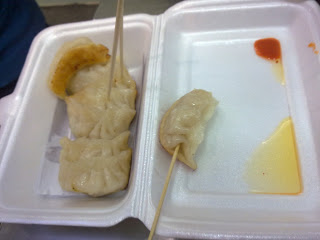 Its is hard to get taxis in Macau so we did most of the touring by food. Good thing most of the spots are near each other. After visiting the different casinos, we went to the Senado Square, a quaint plaza that you would feel like you are transported to a chic European country. You see a lovely fountain at the center and a lot of people walking & hanging out. 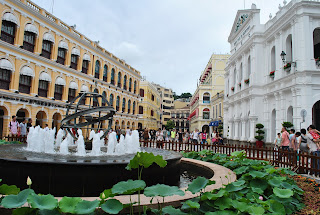 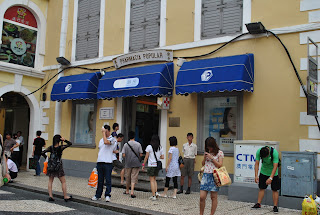 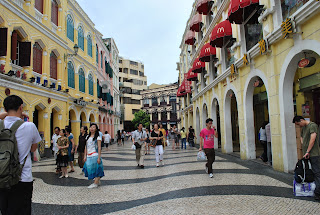 You will pass by St. Dominic’s Church as you enter the square, a nice rustic yellow church. My mother told me that when you enter a new church, you offer a wish or petition to God and your wish will be granted. And that is just what I did, hehe. 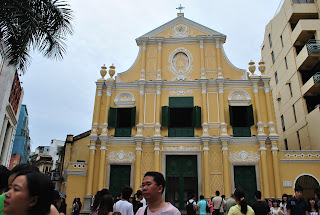 A few blocks ahead is the famous Ruins of St. Paul. It was  a 16th century complex which was originally St. Paul’s College and Cathedral of St. Paul.   In 2005, they were officially enlisted as part of the UNESCO World Heritage Site Historic Center of Macau. It was destroyed by fire during a typhoon in 1835. Now what stand is a southern stone facade with intricate carvings done by Japanese Christian exiled from their homeland under the direction of the Italian Jesuit Carlos Spinola. What is great about this, is it that again has free entrance!!! There is a steel stairway allows tourists to climb up to the top of the facade from the rear. It is customary to throw coins into the top window of the ruins from the stairs, for luck, which I did!! Inside is a museum containing religious artifacts and relics of martyrs. 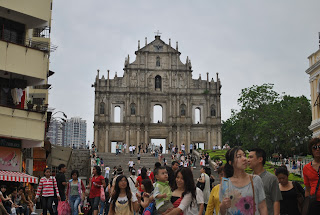 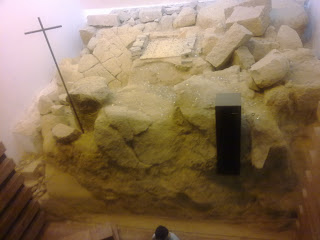 On the the left side of the ruins, there would be stairs leading to the Mount Fortress.  It was once a principal military facility and was one of the city’s strongest defense points.  There are cannons and impressive granite wall. It also offers a landscape garden and a small museum housing ammunitions. On top, you could see the beautiful view of the city as well as a glimpse of the Chinese border. 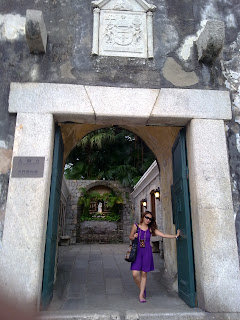 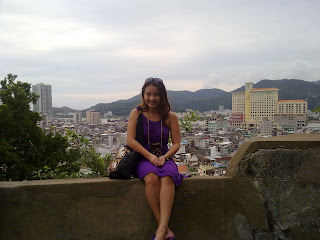 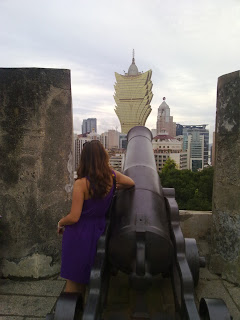 After the educational tour, we were brought into a narrow busy streets with lots of wares were sold and where vendors would shove free food in your face to taste. I totally love it! It was a colorful, noisy, busy street, making me fall for Macau even more. Some of the things you can buy from home can be found here, like the sweetened  meat you can eat with or with rices, trinkets, almond cookies, key chains, seaweed-wrapped wafer and egg tarts. 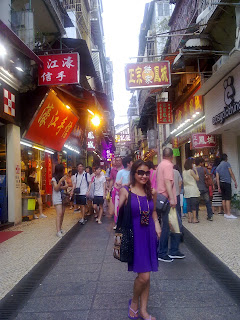 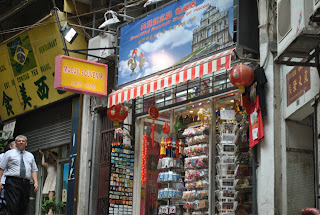 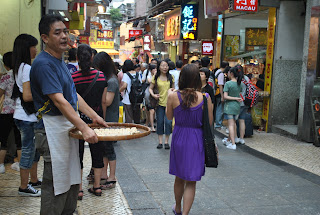 Ohhh, Macau, in a day, you got me smitten! Hope to see you soon…. You showed me a good time. (*with several coquettish batting of my eyelashes)… mwaaah!