My birthday is coming up and I am thinking of getting a red leather wallet or tickets to the new play of Lea Salonga, God of Carnage at DBS Arts Centre-The Singapore Repertory Theatre.
I guess you would know what I chose between the two based from the title of my blog post, hehe. I like to indulge myself in experiences rather than material things I realized. It is in my bucket list to see Lea Salonga perform eversince her “Miss Saigon” days. Though the God of Carnage play isn’t a musical, it would still allow me would to see Lea Salonga perform on stage. 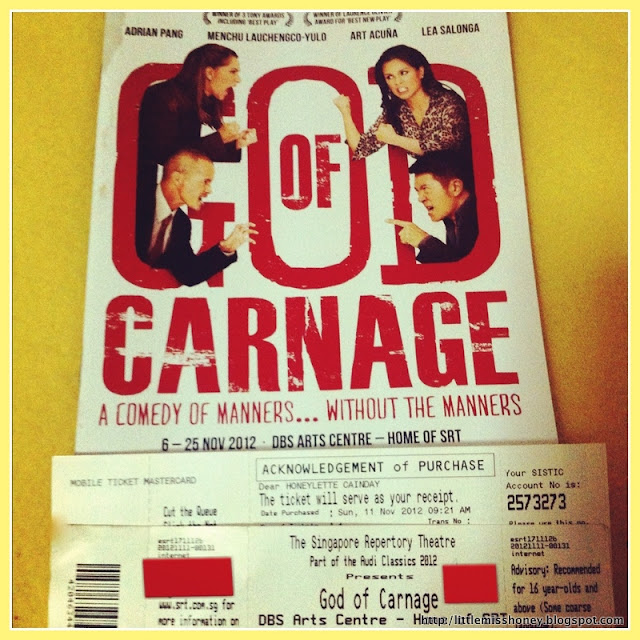 God of Carnage is a comedy about two pairs of parents meeting to address the issue that their sons engaged in a playground fight. It is a funny and witty discourse of parents trying to be parents until the polite pleasantry turn into a candid verbal debate about marital issues, ideals, battle of the sexes and a dead hamster. This brilliant play was written by Yasmina Reza originally in French and translated by Christopher Hampton. This play has won both Tony and Laurence Olivier award for “Best Play”. In the 2009 Original Broadway Production, the characters were played by Jeff Daniels, James Gandolfini, Marcia Gay Harden and Hope Davis. Marcia Gay Harden won the “Best Actress in a Play”.
It is my first time to watch a real theatre play. The only ones I have been to  before were school plays. The play was housed in DBS Art Centre. It looks like the theatre that the Friends characters go to to watch plays, only in DBS Art Centre, the place and seats looks nicer, newer and cleaner. I also snag a great seat.
The God of Carnage with these new set of actors lead by Lea Salonga was performed first in Manila in July of this year. This play is directed by the Lea Salonga’s friend and frequent collaborator, Bobby Garcia. I would like to commend the stage designer for the wonderful set-up on stage. I would love to have that red sofa in my living room, the wall pattern and the light shades on top.
Lea Salonga on stage was a force to be reckon with. Her crystal-clear voice echoes around the theatre with conviction and authority. She is gorgeous and her make-up was immaculate. I prayed that she would somehow spill out a short song in the middle of her dialogue but of course she didn’t. For some weird way as the play progress, she reminded me of my mother. Maybe it’s her hair that was placed in a ponytail or maybe its her character in the play.
I have heard of Menchu Lauchengco-Yulo before. I know she is big in the theatre world with a large body of work to show. But I have never seen her shows until the play. And she blew me away. She was amazing! She was convincing and very courageous in her acting. She was also very pretty on stage. She looks like a Caucasian model on stage. I couldn’t help but beam in pride of these two talented Filipina actresses. I just want to tap a Singaporean shoulder and say, she is Filipina too. There were 4 characters conversing on stage but after Annette (Menchu’s character) took off her blazer, a silent character appeared on stage that distracted me from the four other characters for awhile. It was Menchu’s well-toned arms— her triceps & biceps. I wanted to interrupt her her monologue and  ask her, “Do you do Pilates?”
I thought Art Acuna was Singaporean after seeing him first in the successful series, “Kitchen Musical”. But I learned he is a US-based Filipino actor. He is handsome and dashing. I love his Burberry (?) scarf he drapes on his neck. It inspires me to buy a scarf to drape in my neck too.
But one thing that I got upon leaving the theatre was a big phat crush on Adrian Pang. Art Acuna might be the handsomer guy but Adrian somehow stole my heart. He is a brilliant and skillful actor. He has a perfect comedic timing and manages to catch the audiences’ tickle bone even by his little facial expression on stage. His character successful progress on stage to a meek husband to a sarcastic Neanderthal.
Watching theatre plays is fun and interactive because the audience reaction is raw and ready. Actors can be fuelled and affirmed by the instant reaction of audiences. They hear it. They feel it. We, the audience, are part of the play as we give out in unison our responses to the stimulus on stage. We, the audience, laugh together, gasp together and clap together. The actors and audience becomes an intimate unit feeding off each other for a good 80 minutes.
I overheard a Singaporean said to her friend as they were about to go out of the theatre, “That was good. Way better than the other play we saw last week”. I wanted to butt-in and say, “I couldn’t agree more.”