I heard so much hype about the movie, CRAZY STUPID LOVE from twitter and some of my friends who have seen it. So I feel the sudden itch to watch the movie.


Yesterday was a local holiday. Charter Day here in Iloilo City. Happy Birthday Iloilo City! It was a perfect chance for me and my bf to watch the movie. Yey! 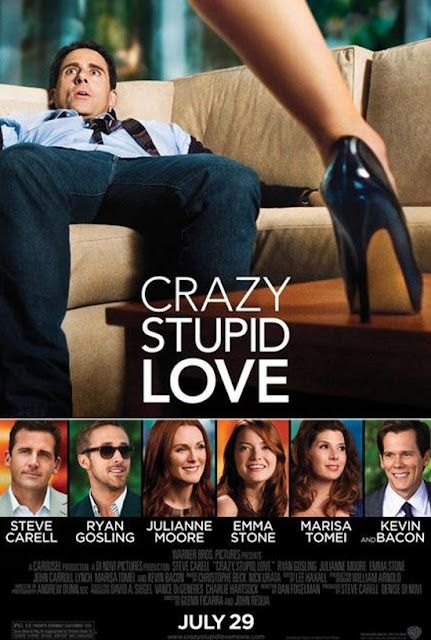 This movie is an all-star cast. You have Steve Carell, Ryan Gosling, Julianne Moore, Emma Stone, Marisa Tomei and Kevin Bacon. My expectations are very high. But I guess that is the problem when you set up the bar too high, you expect too much that what it really is. So a great 30 to 45 minutes of the movie, I was waiting for it to blow me away. It didn’t. IT also did’t help that I came to the cinema with no scratchy clue of the storyline. I thought it was going to be a laugh-out loud-slap-on-my-knee comedy with a romantic theme because of course I expected a lot from Steve Carell and judging from the movie poster. It didn’t come. But don’t dismay, the good news is the blow-me-away parts happened after the 30 to 45 minutes or so.


The 1st scene of the movie have Steve Carell & Julianne Moore in it with Julianne bursting out in a restaurant that she wants a divorce. Next was with this scene of babysitter and Steve & Julianne’s kids at home. I said, “I have seen this babysitter before”. The whole time, my brain was racking out where I have seen her. She reminds me  a lot like Michelle Trachtenberg of Buffy the Vampire Slayer. But she is definitely not Michelle Trachtenberg. Michelle is much prettier and sophisticated. But this new girl is way too tall and very skinny. But i am amazed how this unknown starlet fit right in with these seasoned actors. She played her part as a 17 year old babysitter who is the object of desire of Steve & Julianne’s 13 year old son that is hopelessly in love with Steve Carell’s character, perfectly. She shines on screen. She is not the typical pretty girl but she is infectiously charming. She played her part to a T. Towards the end of the movie, on our way out of the cinema, I realized, OMG, the new “ÏT” girl is Analeigh from the America’s Next Top Model Cycle  I love her! She was one of my favorite.

In America’s Next Model Cycle 11, she was introduced as the hippie Analeigh who used to be in competitive  skating competition and was almost sold as a bride in Saudi Arabia, thinking it was a modeling contract or something like that.

There are two twists in the movie that I liked:
*For those who hasn’t watch this movie, and still kept on reading even if I warned. You might say, what the heck am I talking about. I say, I told you so…..

* I was holding back tears but I want pretend I can be strong enough in tearjerker scenes like above comes up.

Moral Lesson of the Movie:
After every movie we watch when we were younger my mother would always discuss to us the moral lesson of the story.
The central them of the movie was simply never giving up on your soulmate. Or better yet, never give up on love. The 13 year old son is the principal advocate of fighting for your love. Once you find it, never let it go. Love has a lot of phases and seasons. But it will survive these storms and winds as long as you believe in your love for each other. It true what what Steve said that you love someone even if sometimes they get pisses off at each other at the same time. Love is funny like that. Yes,love could be crazy… And often times, we say love is stupid. But once you feel that love, the real love that is so beautiful it makes your heart ache, you know that will all its craziness and stupidity, it all worth it,  because love makes life worth living. And once you found it, you hold on to it and never ever let go…..
Love is crazy…stupid… undeniable beautiful….