Ok, it seems like I failed to mention about the Vietnamese foods we tried in my previous blogs about Vietnam. Well, it is because I intend to write a whole blog entry about it. You see, my sis and I had a discussion of how would you say that your trip had been successful? Some would say if they had a lot of shopping spree & got a lot of neat stuff from the trip. Some would say if they were able to gather some new knowledge of the culture and the country or city they visited. Some would say that they got time to relax…. Mine? A bit of the reason # 2 and also if I  get to try new & yummy cuisine of the new place I’m traveling… Yes, I am certified true-blue foodie…
So would I say that my Vietnam trip was a success? Maybe not at first…
QUAN AN NGON
There are two Quan An Ngon in the city. There is the one in Pasteur Street and another one in Nam Ky Khoi Nghia near the Reunification Palace. We chose the latter branch. The place looks promising. It was packed and there were a lot of foreigners there. It was set in this old atmospheric French villas. We sat outside near the humidifier. It was hard communicating with the waiter and we have to point on the foods we wanted. We were famished from the whole day of walking and we badly want good food. 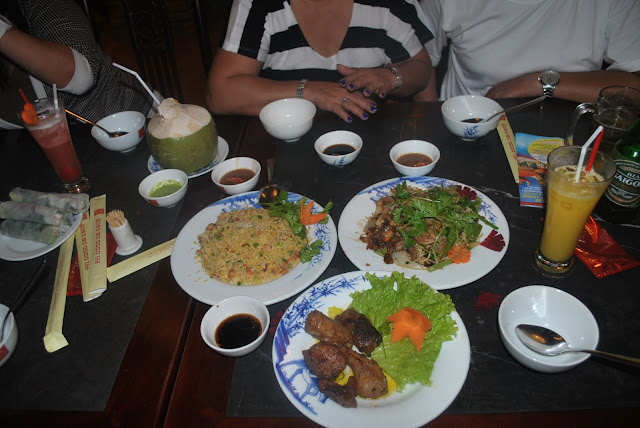 Then the food arrived. We got to have our first taste of Vietnamese food and it left our stomachs crumbling even more. This place was well reviewed. But why?! Maybe we just picked the wrong foods, I don’t know. Vietnamese, we noted, loves leafy vegetables unfortunately, we love meat too much and their food has a certain smell that we still haven’t gotten used to. We rather feasted our eyes on watching this pretty skinny Vietnamese woman eating a lot but ordered A LOT of food. She ate with so much gusto we were so entertained. How does she managed to stay svelte? But then again, she eats mostly veggies… Hmmm.. So inspiring…
But after that dinner, we made a conclusion. We should eat a lot during breakfast where there are bacon, sausages and fried rice during the rest of our stay in Vietnam….
THU THAO RESTAURANT
During our tour in Tay Ninh to go the Cao Dai Temple & Cuchi Tunnel, for lunch after visiting the temple, our tour guide brought us to this restaurant. It looks like an big old house that was converted into a restaurant or maybe it was the the other way around. It seems to be the only restaurant nearby because I haven’t seen any other restaurant when we passed. The lunch was included in the tour. It was already a set meal consisting of soup, crispy noodles, springrolls, chicken, fried rice and watermelon. We just have to pay for our drinks. We braced ourselves for a yet another frustrating meal but you know what, we were surprised! We weren’t frustrated after all but quite the opposite. We loved it too much, we stayed long in the restaurant, chatting and enjoying the foods….  Vietnamese food has won me over right then and there. 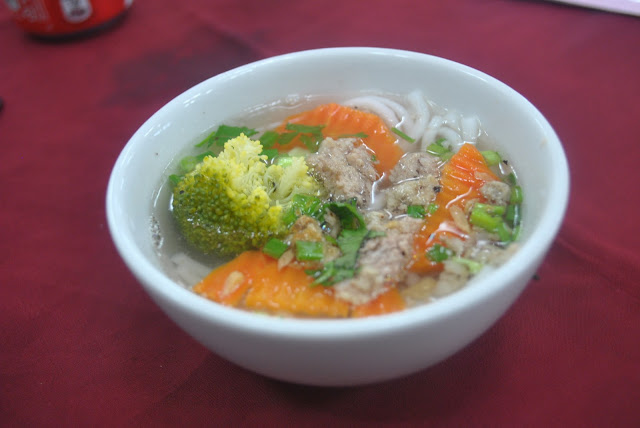 My sis and I wanted to try this because this was the restaurant that Bill Clinton visited. This can be found near the Ben Thanh Market. Also nearby was Pho 24. My sis asked me to choose between the two. Pho 24 look better, aesthetically-wise, than Pho 2000. Pho 2000’s interior isn’t that amazing. It looks just like an old diner. But we did want to try why in all the restaurant in Vietnam, Bill Clinton chose this so we wanted to see what is all about. And yes, Bill, indeed, knows good pho, hehe…. For a little bit of academic discoure, pho is a Vietnamese rice noodles usually served with beef or chicken and this is a very popular Vietnamese dish. 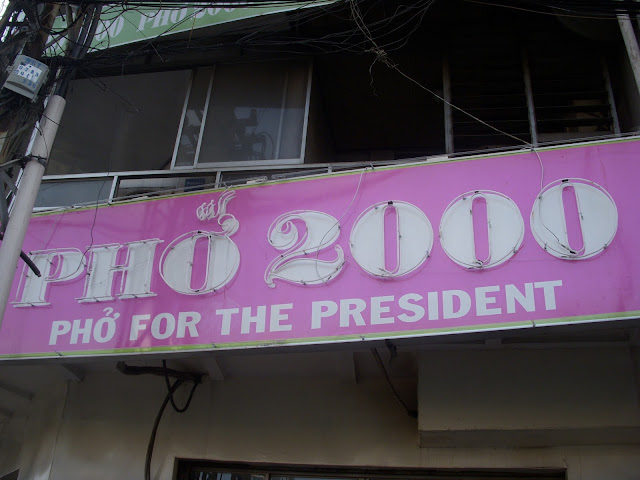 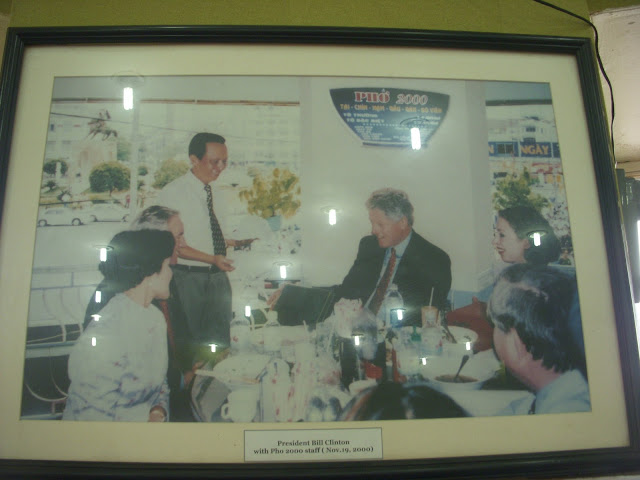 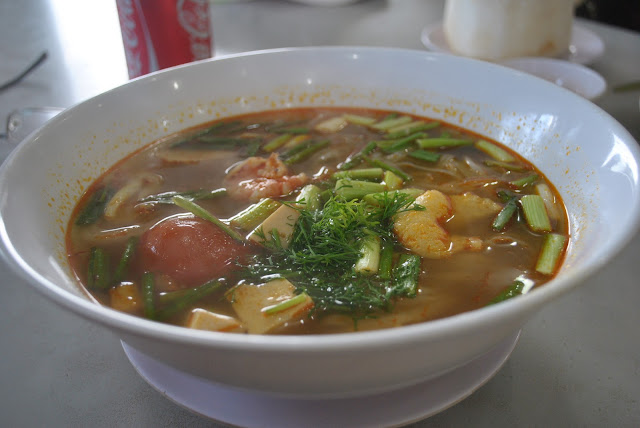 I am not a fan of soup but this seafood pho is REALLY REALLY good… Good choice, Pa! 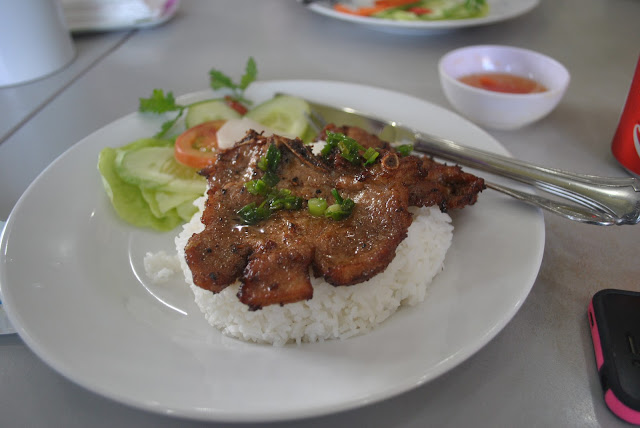 This my bro’s & sis’ pork meal, yummy too. I ordered spring rolls with rice (no pic). It was also very good… So happy with our meal, hehe…


I am often joked by my family & close friends of my love for street foods. And guess what we found some in Vietnam.

We got curious and saw this guy cooking and mixing stuff in this rice paper in sidewalk near Notre Dame Cathedral. 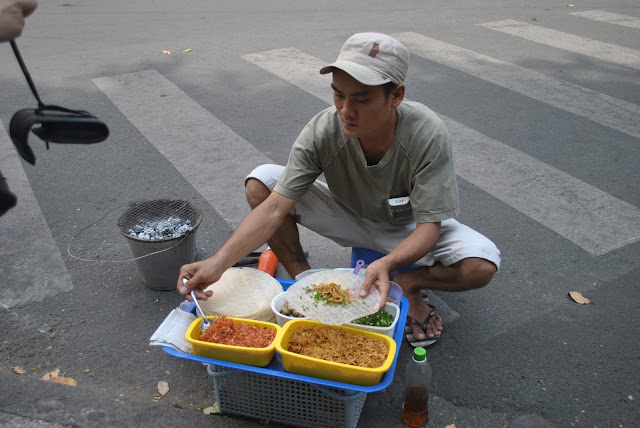 He mixed some small dried shrimps, some herbs, some sauce, cracked a quail egg and cooked it in charcoal and folded it. I couldn’t resist, I bought one. It was yum! Like a crunchy egg “torta”. 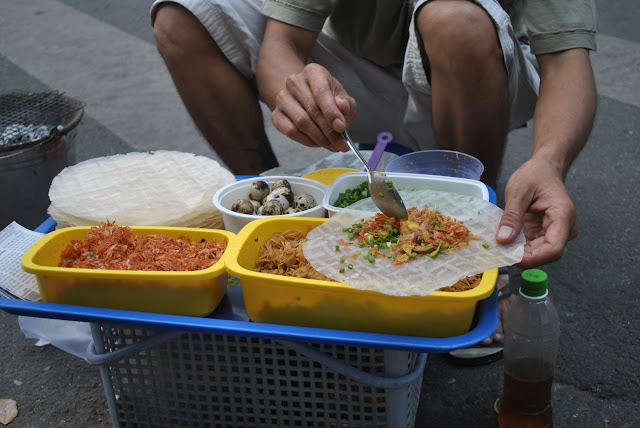 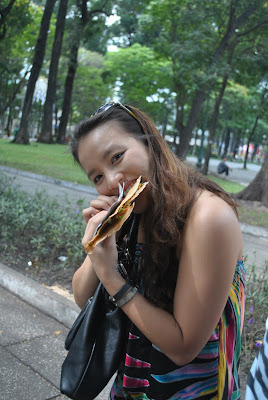 We also saw this guy selling a folded leaves on a stick. We said we will buy one. He cooked the folded leaves on charcoal. There seem to be ground beef inside the leaves. Then he placed the leaves with the beef into a hard bread and placed some sauce into it… Actually, the taste isn’t so bad but I just couldn’t take the smell.

I saved the best for last. This is our favorite restaurant in Vietnam. We ate dinner there twice. It wasn’t anything fancy. It is actually near the Night Market in Ben Thanh. It is just being set up at night and is actually in the sidewalks. But the place is packed all the time and so many foreigners go there. They have a lot of fresh seafoods and good variety of dishes. We can’t help but gush how good the foods are there. 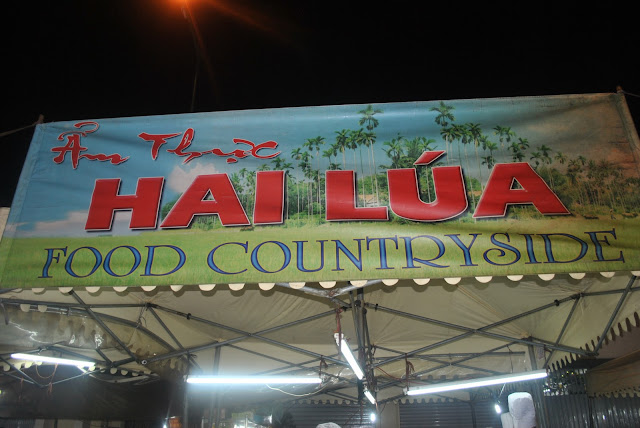 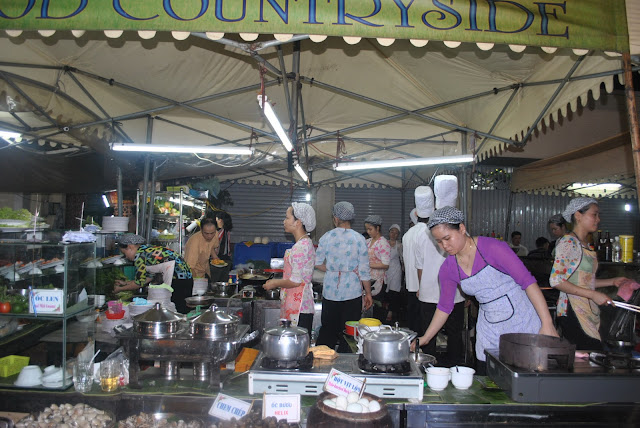 This is pork. We wrapped it in a leafy vegetable which we took a cue from the pretty skinny girl we saw in Quan An Ngon and we dip it in the sweet and spicy sauce. 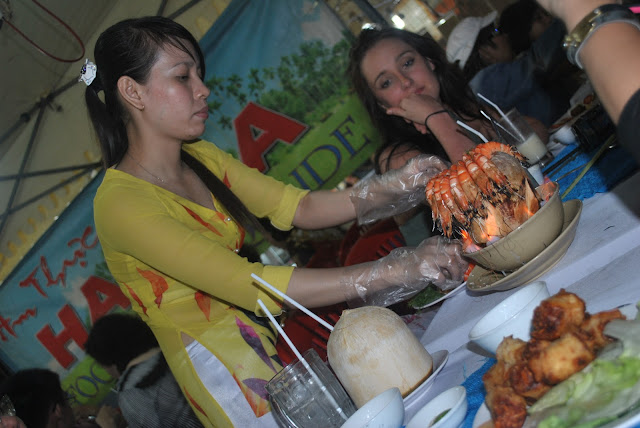 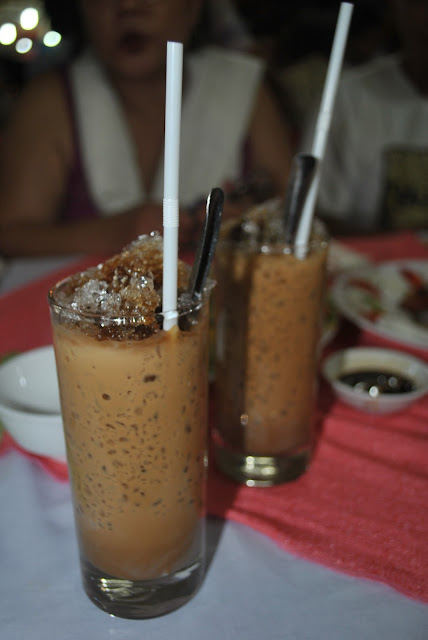 I have been a fan of Vietnamese iced coffee. In most of the restos we go to in Vietnam, I usually order this.. It is so good! Coffee with some condensed milk and lots of crushed ice. It usually comes with a long spoon to help you mix it and crush the ice. We weren’t able to take a pic of the fresh yummy red snapper we ordered. I was hands down our favorite. So juicy…. Now I’m getting hungry…

So I can say that my Vietnam vacation was a success because it gave me a gastronomic adventure worth remembering… How about you? How would you determine if you had a successful vacay?