The Dinagyang is a religious and cultural festival in Iloilo City, Philippines held on the fourth Sunday of January. It is held both to honor Santo Nino  and to celebrate the arrival on Panay of Malay settlers and the subsequent selling of the island to them by the Atis.


The main part of the festival consists of a number of “tribes”, called “tribus” who are supposed to be Ati tribe members dancing in celebration. There are a number of requirements, including that the performers must paint their skin brown and that only indigenous materials can be used for the costumes. All dances are performed to drum music. Many tribes are organized by the local high schools. Some tribes receive a subsidiary from the organizers and recruit private sponsors, with the best tribes receiving the most. The current Ati population of Iloilo is not involved with any of the tribes nor are they involved in the festival in any other way. 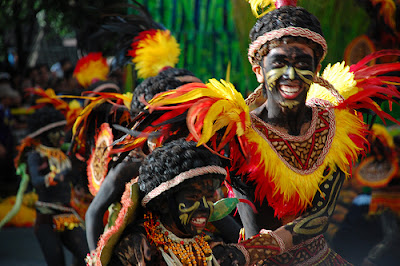 My Dinagyang memories were mostly during my childhood. Months before the festival, Mama would gather me and my siblings, my cousins, her nephew, our helpers and whoever she finds into our trusty jeep and we would roam the chilly streets at night watching the different tribes practicing their routine on the streets. We were just happy watching them, listening to the loud drums and eating hot pandesal (bread). And on the day of the Dinagyang Festival, we would try to push into the crowd ,with our face painted with hearts & whatever shapes using my mother’s bright red lipstick, to watch the dancing tribes. But with the heat of the sun and the impatience of a child, it wasnt long until me and  my siblings would secretly wish the whole contest to be over so we could go home safe from the burning sun.

But somehow someone managed to inject some Dinagyang fever in me. We decided to buy tickets for the festival. Actual seats! With a shade (away from the burning sun)! I couldn’t help get a little bit excited. Even after a late night of partying, we drag our sleepy butts early in the morning to secure our seats. We bought foods from Jollibee because we know the streets are going to be crazy as the day sets in in. 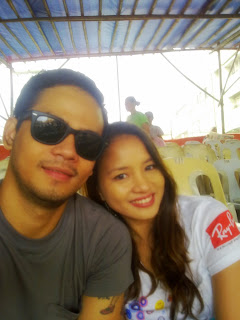 There were 14 tribes competing. The Mayor of Iloilo announced the opening of Dinagyang Festival, the crowd roared. The air was very festive, the drum beats were infectious and the bright colors were buffet to the senses. I was suddenly transported to place of primitive glee and wonder. I clapped and I cheered and I almost secretly weep with amazement ( yes! I am such a crybaby). I was in total awe with how creative Ilonggos are from the intricate detail of costumes, the choreography, the warriors energy, the dancers cheerfulness & grace, the feverish music and the props that was cleverly & superiorly made. 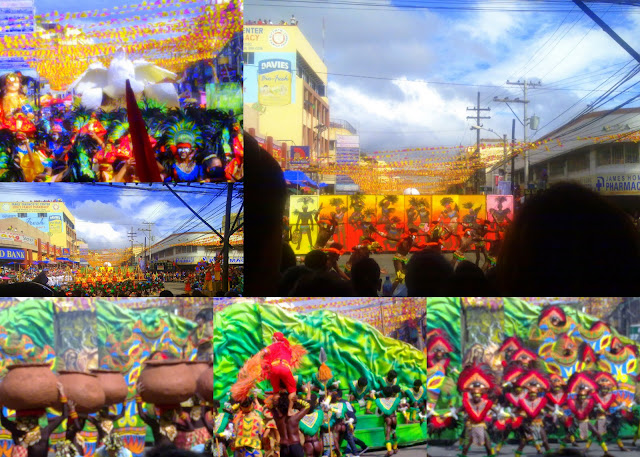 From my ancient Dinayang memories, I realized an evolution of the Dinagyang Festival of my childhood and now. And all would agree that the improvements through the years made us rightfully claim the title of Queen of All Festivals in the Philippines.
Here are the changes I’ve noticed:
1. The tribus now are not contented to wearing just one costume &  headdress, they change costumes more than twice, it would put Jennifer Lopez in an award show to shame.
2. The music now welcomed new instruments besides drums. They use these big tubes lined together in different lengths giving off an ethereal jungle vibe. My boyfriend said its called PVCs. Don’t asked me the meaning of the acronym. As a doctor, i would say its premature ventricular contractions. But i would bet that is not what it means.
3. Before in the Dinagyang competition, they only have warriors for the whole performance. Now, they are joined in by dancers mostly women doing ethnic dances that sometimes you mistake the Dinagyang as the Kasadyahan competition ( a competition the day before the Dinagyang  that showcase the rich culture of Iloilo City with dances and skits).
4. Now the tribes do not relay on their shield or formation by creating words and phrases seen in aerial view to impress the judges and the crowd, they have a movable murals to facilitate their costume change and large installation art to wow the crowd. They also have a lot of props that were so darn creative.
5. There is now an official mascot for Dinagyang- Dagoy! He is adorable, hehe.
After heart thumping, crowd pleasing performances of the different tribes. My favorite tribes were:
– TRIBU SOLOGNON
-TRIBU BOLABOLA ( yes, I am biased, hehe)
-TRIBU PAN-AY
-TRIBU MANDURYAW
It had been a fun fun fun day. I couldn’t wait for next year’s Dinagyang Festival. This is me, Honey, a certified proud Ilongga, signing off — for now.